Ok, so far I thought I am a good cook. I really have to revise that opinion since having eaten at last night's Eurotoques Young Chef of the Year Award dinner. The talent amongst these chefs was so incredible that I was just a humble diner in total awe.

EuroToque is a European organisation representing over 3,500 chefs and cooks. The organisation was established in Brussels in 1986 by Belgian chef Pierre Romeyer of Le Maison de Bouche together with Gualtiero Marchesi from Italy, Juan-Mari Arzak from Spain, Paul Bocuse from France, Cas Spijker from the Netherlands and our own Myrtle Allen. The initiative stemmed from concerns about a potential threat to culinary traditions and food quality in the face of increasing European legislation and open markets.In the same year, fellow founding member Myrtle Allen, set up EuroToques Ireland, selecting exceptional chefs to support her. Today the membership is made up of about180 chefs; most of them active in restaurant kitchens, some in catering and consultancy, others engaged in teaching; who support the philosophy of sourcing top quality local and seasonal food ingredients to serve to their customers, therefore delivering foods of flavour, authenticity and provenance.

The Young Chef of the Year Competition is now in its 22 year and the standard is amazingly high. This year's finalist were:
The menu was so outstanding that I am still sitting here and drool over my keyboard while writing this.

It might not sound much when reading the menu but words were not able to describe the smoothness of the sunchoke mousse or the meringue of the starter. The imagination behind the Lobster Dish, the silkiness of the mash and the surprise venison stew beneath it. Neither shows it the richness of the piglet, the sweetness of the apple puree and the best parsnip mash I have had in a long time. The main was accompanied by a barley risotto so rich and light at the same time - I was in heaven. The dessert was a very unusual creation of set milk that covered a wonderful pear sorbet which sat on top of barley soaked in the smoked whiskey and fresh pear. A total delight of expert execution.

The winner was announced after the dinner and we were all discussing who it could have been - judging by what we had eaten. It was made easier by the fact that we sat together by Emer, event coordinator of EuroToques and Lauren Hise, Journalist of the Irish Times who knew who the winner was - you can imagine the pressure we set them under. We had the pleasure of sharing the table with Niall Hayes and his lovely wife - and we had great discussions about the dishes and all things food - what better way to spend an evening than with great food, good wine and wonderful people. As they say, over good food, great friendships have bonded.

Congratulations to Ciarán Elliott who grabbed the title of Young Chef of the Year 2012. He is only 24 years old and works as Chef de Partie in one of my favourite Restaurants,Patrick Guilbaud, the only 2-starred restaurant in Ireland - so no wonder that Ciarán had such a high standard. He is in his final year of B.A. in Culinary Arts in DIT and judging by his food - he will pass the exams with no difficulties.

Congratulations also to Jack O'Keeffe, 19 years old working as commis chef in Springfort Hall. The youngest contestant, he is attending CIT where he is in his second year of Culinary Arts. A strong supporter of Irish Pudding - Jack McCarthy's Black Pudding was a star ingredient in his Piglet dish.

John O'Connor from the Malton Hotel in Killarney, working there as Chef de Partie, Keelan Higgs from Locks Brasserie, who just won a Michelin Star, and last but not least, Mark Moriarty who is Demi Chef in The Greenhouse. Thank you for your hard work and the outstanding food we were able to enjoy.

Congratulations also to Ruth Hegarty and Emer for organising such a wonderful event.

Thank you to EuroToques for supporting these young chefs on their quest, to promoting the best of Irish food and for inviting me to this amazing event. I guess, I will have to beg next year as I can't wait to see who will step up to the plate in 2013. 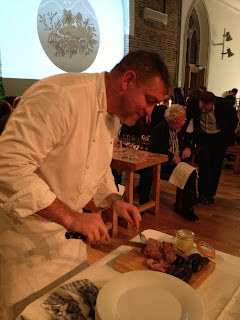