It doesn't happen very often that I am lost for words (everyone who knows me will attest to that) but I was star struck when I had the opportunity to meet the great Raymond Blanc. I knew about his 2 Michelin Stars that he is holding for 36 years (no mean feat) and I knew that he has a series of brasseries to his name as well as the well reputed Le Manoir aux Quat'Saisons (4 Season Manor) as well as his TV personality. I purchased one of his cookery books ages ago 'Recipes from Le Manoir aux Quat'Saison' but apart from all that, I never knew the person behind. Not that we are best friends now (he will hardly remember me) but I was able to see the passion that this man still has after so many years - he cooks for a living for 40 years and to keep that passion alive is an achievement that not many chefs can say about themselves.

He arrived in our humble Blarney after a trip from Rio and the poor man was exhausted but he shared his time and attention to all around him. Knowing that he must have been tired, I didn't want to ask questions that he might get from everyone else - but what to ask a legend like him???? I simply wanted to know what is coming next for a man who has achieved so much in his lifetime - is there a next??? Yes, there is - he is on a quest to feed the next generation of diners. He grew up surrounded by good food - not expensive food, just good food. He - and here he was preaching to the church choir as I am singing that hymn for years - believes that most illnesses can be prevented if we turn back to eat food nature intended us to eat. He has an aversion against processed food (here I almost hugged him) and believes that most allergies have their roots in bad nutrition.

At Le Manoir aux Quat'Saisons he grows most of the food that is served in the restaurant and he talks about the respect you pay to the food that you grow yourself. Prepare it simple and don't mess with perfection that nature provides so freely (and here I fell utterly in love).... I didn't need to pull information from him - he shared his love for food with me and I didn't interrupt him. It was inspiring just listening to him. 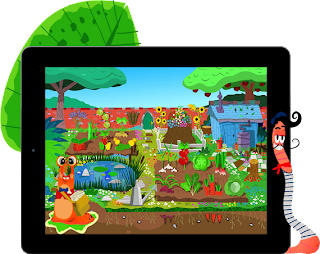 When asked if he would like his two sons to join him in the business, he shook his head saying that he has been sent many children of famous chefs to work and learn in his kitchen and he could see that they didn't really want to do it and started hating food and cooking. He didn't want this for his own children. They are free to join if they decide to do so but he is not influencing them at all.  His love and pride for his sons comes through when he talks about Olivier who has developed an application to bring children closer to understanding food and preparation of same. Henry le Worm is an interactive game-like application that encourages children, and adults, to connect with food and nature. Needless to say that I downloaded it from the AppleStore to get Mr T's little granddaughter into cooking. The application costs €4.49 and can be downloaded from the AppleStore for iPad and iPhone. Henri 'borrowed' his voice from actor Simon Pegg and recipes are of course provided by Raymond Blanc. It has reached #1 in UK in the Education Category and #1 in The Guardian's Top 20 Weekly best application for iPad & iPhone.

Reading through his cookbooks (I got my second Raymond Blanc cookbook 'Kitchen Secrets' on the day and he signed it for me), he refers a lot to his childhood and the food that his mother, Maman Blanc' cooked for the family. Her love for feeding her family good food is what he tries to bring back and a lot of his recipes are based on his mother's cooking. I love the personal touch and that he shares his childhood memories - really have to try the Pain Perdu (his version of French Toast or Lost Bread) that his mother used to make (an updated version with brioche rather than old bread). Since I go back to childhood memories when I think of old dinner traditions, I love that he too does it - it proves that you don't have to re-invent the wheel, just prepare good food and the rest is simple.

I am in total awe of this chef and wish him success on his next ventures - where ever it may takes him.

Raymond Blanc was at Meadows & Byrne in Blarney to launch his new cookware, organised by Revolve Marketing & PR.