It is not very often that I make French Toast at home because I only really like it with brioche and 'normal' bread just doesn't work for me for some reason. So, on Saturday I took my spanking new K-Mix out of the box and made the best brioche one can make at home. I followed a recipe of Firebread House Bakery (if you love bread and want to learn about it, this is the best place to learn it). I forgot that brioche is hard work (same reason I don't make puff pastry too often) but the result was worth it.

My friend Sofie stayed over on Saturday night and I promised her French Toast for breakfast - the recipe below is the easiest and I think tastiest. French toast is normally served with maple syrup and crispy bacon but I think cinnamon apples go just too nicely with it. The recipe below serves 4 people. 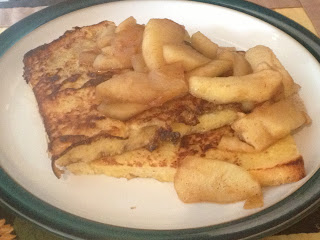 
For the apples, put apple slices, sugar and cinnamon in a saucepan and heat until the sugar has dissolved, stirring from time to time, and the apples are starting to caramelise and have softened. Set aside and keep warm.

Whisk together the eggs, cream and sugar until well combined. Heat the butter in a frying pan. Dip each slice of brioche - both sides - in the egg mixture and add it to the pan. Fry on both sides until the bread turns a golden colour and the mixture has set.

Serve 2 slices of toast with the apples.

Bon Appetit
Posted by Elke at 8:14 AM