What's in Season for January

Have you ever noticed that we stopped following the seasons? We can get anything at any time. Gone are the days where we were waiting impatiently for the first strawberries to arrive, or where we wouldn't have been surprised not to cook with tomatoes in winter.

I have recently watched a video from TedxDublin where months back, Kevin Thornton held a talk about the seasons and how we have forgotten about him. That talk pushed him up on the ladder of my 2013 heroes. He spoke about his childhood and how he and his family thought nothing of following the seasons - that's what people did back then. And for myself growing up (I am still not admitting to my age), it was normality to eat what was available and I can't remember that people were even asking for tomatoes in the winter months. So, the question is, if no one was asking for out of season produce, why did it happen that we are shipping food from around the globe to our supermarket shelves?? Now we are so used to having everything available at all times that we demand it when a shelf in a supermarket is empty. Farmshops closed down in the process and are just coming back slowly and are considered 'cool and vintage'. 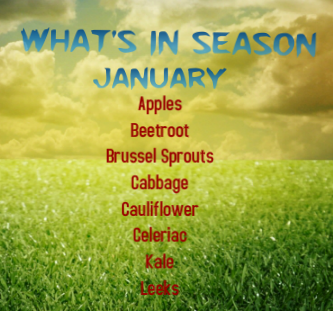 I have to admit, even I sometimes go out of season simply because it is on the shelves. But do I really need fresh tomatoes?? I have jars filled with tomato chutney as the season gave us a wonderful crop. Why didn't I simply preserve tomatoes to use now. Because I know that I love the chutney, it's a great gift for friends and Mr T loves it with his cheese. But I also know that I just have to pop down to Blarney and pop into the local supermarket to get tomatoes at any time.

So, I am as guilty as everyone. But I grow my own vegetables, so know how good they taste when they come fresh out of the ground - nothing compares to it no matter how the supermarkets use modern technology to make the food look good in the shelves. Nothing is more rewarding to place freshly prepared vegetables in front of your family and friends and hearing them say that it tastes better than anything they have ever eaten. So I have decided to share with you what's in season for every month. Starting with January you will see that a lot is still in season. Beetroot is such a versatile vegetable, makes amazing soups & risottos. But you can also roast it nicely with balsamic vinegar or serve it with a nice hazelnut crumble.

Kale is a rich flavoured cabbage that is mostly loved by chefs - not so much by homecooks but it has such a wonderful dark green colour that dresses every plate so beautifully. By the way, the darker the green colour of a vegetable, the more iron it is suppose to have.

Parsnip taste wonderful when slow roasted with a drizzle of honey and who doesn't love a good old fashioned cauliflower cheese gratin. You see, winter vegetables are not boring - they are meant to warm us and give us the minerals our bodies need to get us through harsh winters.

Please have a look at the video of Kevin Thornton - I think you will be inspired as much as I was. So remember the seasons.
Posted by Elke at 9:17 AM