I am very lucky to have one of my closest friends being my neighbour. Now and then we meet at The Cottage to catch up and share the gossip while nibbling away on some food and sipping great wine.

Last night was one of these girly nights and I decided to make some bruschetta with mozzarella cheese. If you can, try to buy Toonbridge Mozzarella as it is delicious on this and produced in Macroom. I used baguette rather than ciabatta which would be the proper bread to be making bruschetta but I didn't have the time to shop around or to even bake one myself - so baguette from the supermarket had to be enough.

I also used small plum tomatoes - I believe that they have more flavour but use what ever tomato you like or have ready in the fridge.

It is a tasty little snack without too much hassle - raffled up in minutes - so giving you loads of time to enjoy the company of your friends. 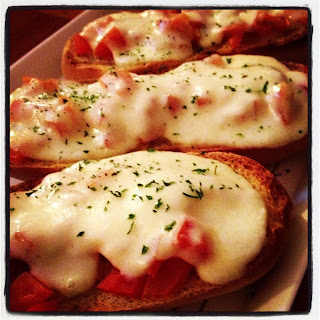 For 4 people you will need

Preheat the grill. Half the baguettes lenghtways and brush the cut sides with the olive oil. Place the baguettes cut side up under the hot grill until the baguettes are slightly crisped up.

Rub the garlic halves over the cut sides of the bread. Mix the chopped tomatoes with the basil and season to taste. Spoon the mixture onto the baguette halves and cover with slices of mozzarella.

Place under the grill until warmed through and the cheese has started to melt. Sprinkle with some more basil and serve with a nice glass of chilled Pinot Grigio

Bon Appetit
Posted by Elke at 4:29 AM