Ok, first thing first.... did I like the Cork Food Fest? Yes and no. Was the event good organised? Yes. Would I go again? Oh Yes.

So with that out of the way, let's talk about what I liked and what not. If you know me, you will know that I am all about food, food producers and supporting them as much as I can. I love going to restaurants and I am always delighted to see new food ventures popping up. Some are good - and some are not. Anyhow - Cork Food Fest was all about restaurants. Only a few producers were around which was a bit of a letdown for me who loves to mingle and chat with all of them.

Participating restaurants were the same as last year, only Fresco being the one that new - can't remember if Springfort Hall was there last year or not. At least, this year, not everyone offered Fish & Chips which was the main offering last year. Corona Extra & Murphys were the main stalls where beer were to be had. Sober Lane shocked me by charging €5 for a 330ml bottle of Ginger Joe (just to let you know, you can get it in Bradley's 4 for €10) so I didn't go back for seconds. Not sure what Corona and Murphys charged but I was hoping that Rip-Off-Ireland is a thing of the past.

The restaurants were great and most of them made a big effort to display their food in the best way - some even had tasting plates displayed so that you knew what you were getting. Presentation was gorgeous and you had the feeling being at a giant garden party at an exclusive mansion. The weather was great and the people were soaking up the atmosphere. Plenty of entertainment for the children made it easy to take the whole family to Fitzgerald Park.

Mr T and I went for the first of the 2 sessions which runs from 12 - 4 (second runs from 5:30 - 9:30) and that might have been a mistake as not all of the tents were occupied. Also, the layout was a bit mis-fortunate for some as Sage, Fresco and Ballymaloe were hidden behind the demonstration tent. Saying that, the tables and chairs at these restaurants gave a view over the lake and fountain which made up for it.

Some of the food was outstanding and chefs really took up the challenge of presenting their skills and talents. A big up from last year in my eyes. The lineup of cookery demonstrations included Andrew Rudd (my brothers girlfriend downloaded the recipe for his cheesecake from his website), Fred Deformeaux and Darina Allen. Fred is headchef in Greenes and in my eyes one of the best chefs we have in Cork. So obviously, I wanted to watch him doing his magic. He cooked chilled beetroot soup which was delicious (just too much pepper for me as a pepper hater and I would leave the mayonnaise out) and Black Sole with Mussels & Chorizo. I was sitting right at the front and was drooling with the aroma floating through the air.

A great event for Cork - just hope they include (and invite) more food producers. I heard that the rent for a stall was extremely dear so that might have been the reason - food for thought for next year. But congratulations to the organisers - a great event. 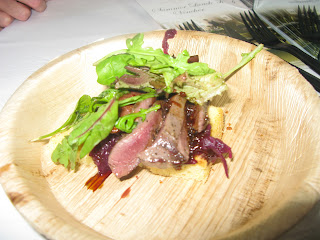